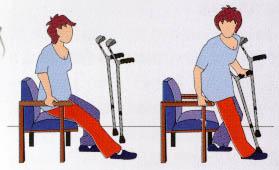 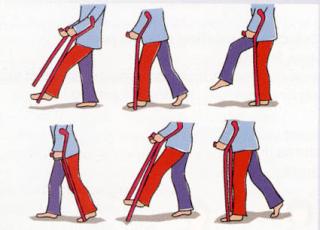 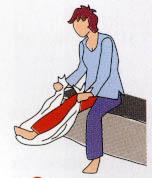 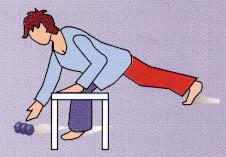 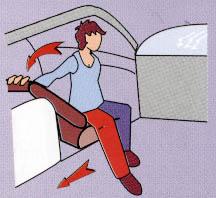 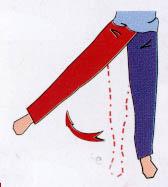 General guidelines and advice to follow emmediately postoperatively and during the first weeks.

Avoid rotational movements of the trunk (this is the forced rotation, in bed or standing, of the upper half of the body with support on the operated leg).

Never stretch the the operated leg stretched straight ahead when laying down (ie no Straight Leg Raising).

Crossing the legs is also discouraged during the first weeks after the operation.

The physiotherapists and occupational therapists will accompany you during your stay in the hospital.

In the hospital you will be advised to sleep on your back. The operated leg is in a gutter to ensure a position that is as comfortable as possible. Once at home, sleeping on the back is recommended. Many people difficultly endure and prefer to sleep on their side. If you wish to sleep on the side, do not do this on the operated side and make sure there are 1 or 2 pillows between the legs to keep the legs apart.

Getting out of bed:

To lay down in bed:

Sit down on the edge of the bed where you take support on both hands. Hook the operated leg with the non-operated leg and then move both legs in a block.

If you have a low bed at home, you can easily increase it by placing phone books under the legs of the bed or putting a second mattress on the bed. 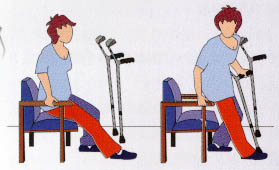 Choose a good seat or seat. Make sure that it is steady with a relatively high seat with straight backrest and armrests. So no deep low seat.

Stand up with your legs against the chair or seat. Sit down and take support on the arms to slow down the sagging of the seat. Keep the operated leg almost stretched.

Take support with the arms on the armrest and use the non-operated leg to straighten while keeping the operated leg stretched.

Avoid standing still for a long time and divide the body weight over both legs when you are supported by 2 stools.

Gait with 1 or 2 crutches

Depending on the type of prosthesis, the age, the condition before the operation, the general fitness, you will have to go through 1 or 2 crutches for a very short to a slightly longer period.

How do I adjust my crutches well?

Adjust the crutches at the correct height. The elbow is best folded 30 degrees so that the arm muscles can work so more powerful. The handle should be aware of the hip (this is about the height of the bony protrusion that you can feel on the side of the thigh called trochanter).

How do I use my crutches while walking? 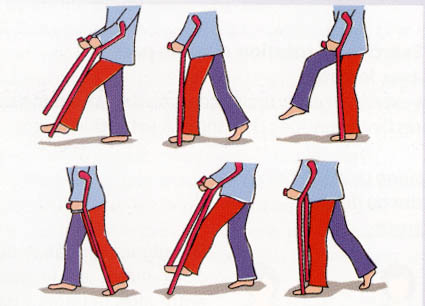 When using 1 crutch: Hold the crutch on the unoperated side and move the crutch together with the operated leg.

How do I go up and down stairs with crutches?

Stairs up: Take step by step in three times

Phase 1: Bring the non-operated leg to the top step by taking support on the crutches. Tool for this: 'you are ascending to heaven' (you start with the healthy leg, the good leg).

Phase 3: Both feet and the two crutches are now on the same step. Now repeat the movements until you are above.

Stairs down: Take step by step also in three times

Phase 1: Place both crutches on the lower step where you take support on the non-operated leg.

Phase 3: You add the non-operated leg. Both feet and the two crutches are now on the same step. Now repeat the movements until you are down. 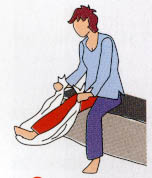 Choose a shower over a bathtub. In the shower you can use a simple plastic chair. It can be useful here to lay an anti-slip mat in the shower or bath. In any case, it is safer to wash yourself while sitting. In the beginning, a hairdryer can be easy to dry or a large towel.

Putting on socks and shoes

Closed shoes that fit well, are sturdy and are provided with an anti-slip sole are recommended. Very easy during the first weeks are sport shoes with velcro's. Avoid excessive heels. Heels of 3-4 cm high and wide are better.

Putting on shoes: Avoid a standing posture where you stand on one leg and pull on the shoe. Instead, take a long shoe puller, sit down and put on the shoes for. There is also a kind of stocking puller for putting on stockings.

To put on a pair of pants, suspenders can be useful (not to hold up the pants but to attract the pants more easily). Always first insert the operated leg through the leg. Shorts are also easy during the first weeks.

Be careful during the first few weeks, take your time and do not force! 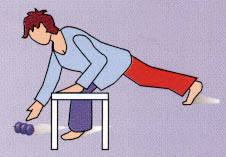 If you wish to pick something up, stretch the operated leg back and lean forward with the body. Always bend with 'the arms between the legs' in line with the object you want to pick up (so certainly no turning movements).

When you do shopping, be sure to take a cart. If you are traveling for the first few weeks, take a suitcase on wheels that you can push instead of pulling (to avoid rotational movements of the body). 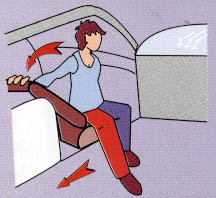 Simply walking is the best exercise you can do after a hip replacement.

Sometimes your surgeon will recommend specific postoperative exercises to help you regain smooth mobility more quickly. The physiotherapist will assist you with this and you can also do some exercises at home. 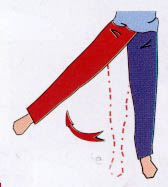 Standing upright on both feet where you take support not to lose balance.

Exercise to strengthen the buttock muscles (extensors of the hip)

You lie with the belly flat on a table for example where the legs are relaxed.

Raise the operated leg properly without rising above the horizontal plane. Hold this posture for five seconds and then return the leg. Repeat this exercise a dozen times. And do the same for the non-operated leg.

Starting position: Lie down on the back at the end of the bed with the seat just over the edge of the bed.

Fold one leg and place it as close as possible to the chest with your hands. The other leg hangs freely with the heel on the ground. You will feel the stretching of the front thigh muscles and the hip flexors. Try to maintain this posture for at least 1X per day for each side.

Put astride a chair.

Keep this position again at least 1X a day for a few minutes. During this exercise, squeeze the thighs regularly, afterwards you try to spread the thighs even further when you release them.

Sporting injuries of Hip and Knee